In recent years, EVs have become synonymous with the future of automobiles. Due to the worldwide environmental movement towards clean energy and the desire to increase fuel efficiency in the United States, people are turning to electric vehicles (EV) as a solution to gas-powered transportation.

Along with the desire to lower emissions and air pollution, EV cars have attracted customers who want to save money in the long run. These customers hope to avoid the nation’s high gas prices, but how are these cars performing, and what models are car manufacturers releasing to entice customers?

Here is the latest EV car news, including industry trends and which models to look out for this year.

Affordability is a major factor for potential and returning buyers, and it’s impacting the EV car industry. While there’s widespread interest in switching to electric cars, most consumers have reservations because they are wary of spending a lot of money.

Of course, a warranty from Cars Protection Plus helps protect consumers from high costs of damage and repairs, but the initial price tag is still considered expensive and is affecting the number of purchases in 2021. In 2019, the sales of these types of electric vehicles tipped over the two-million mark. However, nationwide EV sales still only makes up less than 2% of vehicle purchases in the United States, which is concerning to manufacturers and investors.

However, Europe and China are showing different numbers, mostly because of a greater concern for environmental damage and government involvement. For example, European car manufacturers recently debuted several new models with eco-friendly features that cut costs thanks to government incentives. As a result, we’re seeing more buyers worldwide than ever before.

Regardless of the low purchase figures in America, almost every major car company is releasing its own new electric vehicle models to appeal to customers. They know customers are interested, and they’re working hard to offer them a great deal by decking each model out with the latest eco-friendly perks.

Known as the leading company of electric cars, Tesla continuously draws attention as it releases new models. The 2021 Tesla Model 3 is the latest in the company’s line of mass-market EV cars. With software updates, Tesla’s new model improves upon past models’ features as well as the battery. Additionally, it costs less than the company’s Model S.

In its own spin on the EV car, Mustang has released the 2021 Mustang Mach-E Premium. With its sports car styling and technology (Apple CarPlay, Android auto, and touchscreen on dashboard), this model offers a mixture of style and performance. Though it is only a Mustang in name, it still provides useful features and a great price for its features. Being nearly $25,000 less than a Tesla X, a Mustang Mach-E may not have as much range, but it does include a lot for a vehicle at its price.

The 2022 Nissan Leaf is the cheapest electric car in the United States. It is considered the ideal car for those who are new to EVs and do not want to splurge on their automobiles. The model features ProPilot driver assistance software and ePedal one-pedal driving mode. It also supports Apple CarPlay and Android Auto. Those with a tight budget and a curiosity to switch to electric vehicles may find the Leaf to be favorable for one of their first electric cars. 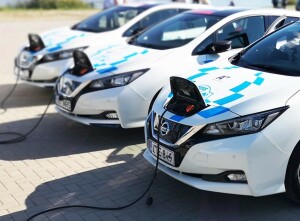 Many other companies offer their own takes on the EV car. The GMC Hummer Edition1 is a pickup truck with off-road prowess, great horsepower, and range. However, its drawback is how expensive it is compared to other companies’ models at $112,595.

At an even higher price, the 2021 Lucid Air Dream is known for its all-wheel drive and status as the world’s most aerodynamic luxury car. Due to how sleek and swift it is, it earns its namesake of the Air. High prices for these EVs are not surprising due to their designations as luxury vehicles with special features.

The number of plug-in hybrid electric vehicles (PHEVs) and fuel cell vehicles (FCVs) is increasing along with stronger, more appealing technology for each new model. Manufacturers are attempting to lower CO2 emissions with emerging engine technologies. Along with this, the average horsepower of new EV vehicles continues to increase. Electric vehicles can advance in weight and power without emitting higher emissions, unlike those with internal combustion engines.

Updates on the Movement Towards Clean Energy

In an effort to research and promote the benefits of electric transportation, several organizations formed a coalition called the Southeast Electric Transportation Region Initiate (SETRI). This group aims to address issues such as EV charging, accessibility, policy guidance, job growth, and consumer awareness.

As this industry develops well into the future, this coalition will focus on the improved coordination of companies that distribute electric vehicles. The widespread use of clean energy in transportation is a major part of their mission. Their continued work is supported by a great number of groups and the list is growing.

There’s no doubt that there is major appeal for EV cars in the United States and abroad, but manufacturers are realizing that consumers need more reasons to invest in these vehicles. That’s why we’re seeing new engines with stronger horsepower, brand-new models with technological innovations, and government incentives to purchase electric cars.

It may take the American public a long time to realize why these vehicles are worth purchasing, but we expect the popularity of EVs to slowly continue and lead to more purchases in 2022 despite the affordability concerns.